Non steroidal anti-inflammatory drugs (NSAIDs) (brand names: Brufen, Naprosyn, Voltaren, Celebrex, Naprogesic) are medicines commonly used to treat painful swollen joints. They are not steroids but are effective in reducing pain and stiffness. These medicines are often used when your child is initially diagnosed with arthritis because they quickly control the pain and inflammation. However, usually other drugs need to be added over time in order to further improve your child’s condition.

How will it help?

How are NSAIDS given?

They are given as a liquid or tablet. NSAIDs should always be taken with food. This can make it easier on the stomach. 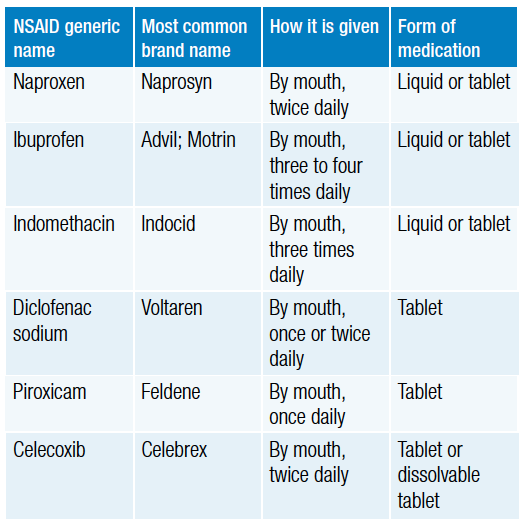 What is the dose, and how often is it given?

The dose is calculated on your child’s body weight. How long will it be used for? The NSAIDS may be used while your child has ongoing pain.

Are there any side effects?

NSAIDs usually helps your child’s disease but, as with all medicines, side effects can occur. Some are common, and some are rare. Most young people don’t have any problems when they take NSAIDs. Things you need to know when taking this medicine

These drugs come in many forms. Please ask your doctor or pharmacist for more specific information.

What to do if your child is sick

If an additional medication is needed for pain or fever, give paracetamol (Panadol). Do not give another NSAID like ibuprofen (e.g. Nurofen), which may be included in cold and flu remedies. This would result in taking too much anti-inflammatory medication.

Many drugs used to control inflammation have a common side effect of stomach upset. Taking combinations of these drugs (more than one NSAID) can increase the possibility of this happening.

There is no added risk of infection.

You may hear a lot of different information about NSAIDs from friends, pharmacists or people you know. If you are worried about anything, please talk to your child’s doctor or nurse. If your child is taking NSAIDs they should see their paediatric rheumatologist regularly to make sure the treatment is working and to minimise any possible side effects.

This medicine should be kept in a safe place, as accidental overdose can be serious.